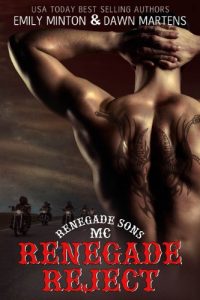 Daisy “Little Flower” Anderson has lived her entire life on the sidelines of the Renegade Sons MC. Her father is a member, and her mother a club whore turned old lady. Not wanting to follow their footsteps, she chose a different path; one that keeps her close to the biker family she loves, but out of the club.
Struggling to keep it together, she never thought she would have anything of her own, until she met Preach. He is everything she swore she didn’t want in life. One night of passion leads to unexpected consequences, and she knows, now more than ever, it’s time to move forward.
Garrett “Preach” Austin lived his life caught in his father’s iron fist. He never thought he would want anything more than freedom from his past, until he met his “Little Flower”. She shows him there is more to life than pain.
Preach has a secret; one that forces him to choose between Daisy and his brothers. Even though he loves Daisy, the Renegade Sons are the only true family he has. He knows he can’t have her, yet he can’t let her go.
When Daisy moves on, Preach realizes what he’s lost. Can he prove that he’s the man for her, or is he too late?

WARNING:
Renegade Reject contains adult situations some readers may find offensive. This is a raw and gritty story involving explicit sex, foul language, violence and drug use. Not intended for readers under 18.