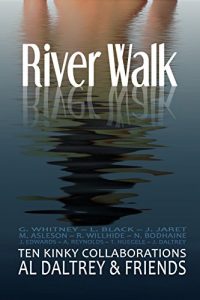 The concept behind this book involves female writers bringing to life stories that stem from one male Dom. True collaborations. (Similar to a ‘Duets’ album). Intentionally, a range of female authors were approached. Some are established and successful; while others were previously unpublished. Each writer brought her flare, her style, and her talent to the project. The subtle connection linking the stories relates to the famous River Walk in San Antonio Texas.

The Power of a Woman (Gina Whitney). Our demons were made for each other. Our facades mean nothing when it’s just me and you. Sin from thy lips. Trespass sweetly urged! Give me my sin again and again. A modern day Romeo and Juliet meets Sopranos.

Spanked! (Lena Black). Recent college graduate Mila Petrov needed money to repay endless school loans. How far would she be willing to go when she meets a handsome doctor with a dark side and a mysterious machine?

Un-cashed Cheque. (Melissa Asleson). The road of self-discovery can be long, but for Macy Seduva, an unplanned detour could actually be the most effective route.

The Discover Ring (Rosemary Willhide). All wedding planner, Sylvie Hancock, wants is to marry her long time boyfriend. In her quest for an engagement ring, she discovers an unexpected desire simmering deep within.

One Last Cigarette (Noelle Bodhaine). We all have three lives: public, private and secret. Jackie’s secret is her vice, in private she longs for more, in public she is happy. When someone’s virtue pulls her in, will her vice push him away?

Through The Ages. (Jen Lassalle Edwards). An older submissive, Libby Simms, befriends her nurse, while ill in the hospital. She shares the story of her life, including her deepest secrets.

First Journey, Second Thoughts (Ali Reynolds). A young woman meets an online Master. While their relationship deepens, there is mystery – as things are not always as they seem.

Three Wishes (Tiffany Huegele). A husband grants his wife, Amelia Hopkins, three wishes. She in turn, grants him one. Will she play it safe or step out of her comfort zone?

Love’s Notion (Jaycee Daltrey). Vivian returns to her hometown and stumbles across a picture of her teenage crush. Unable to squash her curiosity, she decides to stalk him. She knows it’s wrong, yet can’t help but play with fire.