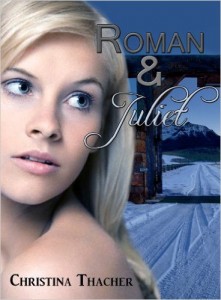 Juliet Howard, a regular sub at The Aerie, figures she’s won the sub lottery when she looks up at a real cowboy, complete with the boots and a Stetson in one hand. But when they get to The Medieval Room, she realizes that Roman’s not exactly an experienced Dom. Still, he’s the sexiest man she’s seen for a long time. And since the regular Aerie Doms are either paired up with their own subs or nervous about playing with Juliet because she’s “the delicate one,” she’s not letting Roman go just yet.

Can one night together be the start of something wonderful, or will it just be a fantasy played out for them both?

Christina Thacher wrote this short story so you can try out her writing at minimal cost. Roman and Juliet features other characters from The Aerie Doms universe, but it’s a stand-alone story with its own satisfying ending.

Bonus material: this book also includes the first chapters of The Locked Heart, The Frozen Heart, and The Secret Heart (books 1 to 3 of The Aerie Doms series).

Get Roman and Juliet at Amazon