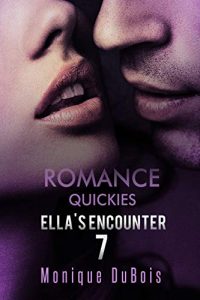 In Romance: Quickies (Ella’s Encounter – 7), curvy girl Ella has a high-flying encounter with a manly construction worker but is forced to leave her business in the hands of a temp. Will the flames of her passion prove to be her financial undoing?

Seven friends living in New York City. One unusual competition. Who can have the most intimate encounters in a month? Ten thousand dollars is on the line…

Quickies are bite-sized steamy stories that follow a group of women living in New York City who compete to see who can have the most casual hookups in a month. Which woman will sleep with the most men to win the bet? Will any of them fall in love with their conquests along the way?

These sizzling-hot books can be read as stand-alones or as part of the Quickies series.

This series is being hailed as a contemporary Sex and the City.

Get Romance: Quickies (Ella's Encounter – 7) by Monique DuBois at Amazon