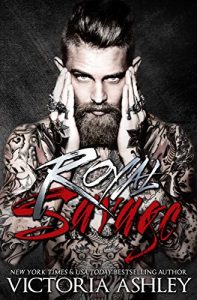 ROYAL SAVAGE
I CAN’T CLOSE MY EYES… I refuse to. Every time I do, all I see is blood, death, and pain. I can feel it – almost taste it, bringing me back to that night.
It doesn’t matter that I’m still breathing; I no longer need it, I no longer want it. I despise it along with everything else around me.
The only thing I long for is to fu@king fade away. I’ve given up. Until her at least…
AVALON.
She comes into my world, knocking me on my a@s.
It turns me on to have her around me. Makes me want to wrap my hand around her tight little throat and fu@k her until she feels my pain, feels the monster in me, but also makes me want to protect her from the very thing that she should be afraid of… me.
Once she sees the damage that I’m capable of; she’ll look at me like everyone else around me does: with fear.

AVALON KNIGHT
HIS EYES… THE DARKNESS IN them draws me to him, making me want to taste him, feel him… and save him. I shouldn’t have gotten on the back of his motorcycle that day. I know that now. Colton warned me. I was told it was dangerous. I was told that nothing would be the same. He was right.
ROYAL is dangerous, dark, and seductive; the very thing that keeps me hanging on, willing to give my last breath just to touch him… breathe him in.
He’s savage, inked, and highly captivating. So different from his brother…
He’s hazardous to my health, mind, and body, yet the only thing that I crave. I want to free him. I want to change his mind, but I’m afraid that he’s already too faded…

Disclaimer: This entire series is graphic with detailed violence, sex, and language.
If you’re offended by books that have explicit content, please proceed with caution.