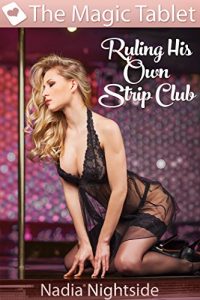 He could turn her into whatever he wanted.

Jacob used to be a regular guy until the tablet entered his life. Now he possesses the powers of a god, able to change his normal body into the kind that makes women bow down with unstoppable lust. He can also transform beautiful women into his eager, willing sexual servants with swipe of his fingertip. With the world at his feet, he does what any red-blooded man would do—he decides to take over a strip club and make every last fertile beauty there his delectably sexy breeding lovepets. But what he doesn’t expect is that there’s one dancer who steals his heart away—Daniela, who is more gorgeous than all the rest, and who is terribly turned on by the prospect of being owned by a god. She wants to convince him that every God needs a Goddess…one who will still be utterly obedient to him in every erotic way, of course.
And yet, there is trouble in paradise. The immortal sorceress Celeste aches for the power Jacob holds, and if she tracks him down, she’ll crumble his new kingdom to dust…