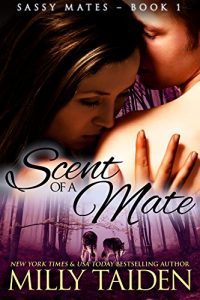 An alpha looking to claim his curvy, sassy mate is about to learn it’s not as simple as a bite.

Mission: Scent a Mate
Jordan Alvarez knew that a promise to her best friend involved staking out the local wolf pack’s scenting ceremony and recording the graphic details, but she was the writer and the only one with the balls to finish the task. No one would know that four human women had sneaked proof of their rituals, or at least, that was the plan until Aric Wolfe showed up.

Mission: Stake a Claim
Aric Wolfe knew his baby sister was up to something, and expected her best friend, Jordan, to be in on the chaos. He finally had an opportunity to lay claim to a mate that had been under his nose for years. Jordan’s scent called to both the man and the animal, and he was done fighting the call of the beast. It was time to mark his mate.

Mission: Survive an Alpha
When a good intention creates a problem for the Wolfe family, Jordan finds herself being stalked by a woman intent on claiming Aric as her own. Battle lines will be drawn, love will be put to the test, and Aric will have to fight Jordan’s strong personality to keep her alive. Two alpha hearts seeking control will either find the balance or risk losing their love forever.

Mature reader warning: Adult content including but not limited to: Violence and raw sexual language and actions.