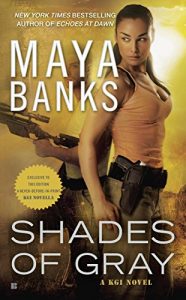 The Kelly Group International (KGI): A super-elite, top secret, family-run business. Qualifications: High intelligence, rock-hard body, military background. Mission: Hostage/kidnap victim recovery. Intelligence gathering. Handling jobs the U.S. government can’t…P.J. and Cole were sharpshooting rivals on the same KGI team and enjoyed a spirited, uncomplicated camaraderie. Until the night they gave in to their desires and suddenly took their relationship one step further. In the aftermath of their one-night stand, they’re called out on a mission that goes terribly wrong, and P.J. walks away from KGI, resolved not to drag her teammates into the murky shadows she’s poised to delve into.Six months later, Cole hasn’t given up his search for P.J., and he’s determined to bring her back home where she belongs. Bent on vengeance, P.J. has plunged into a serpentine game of payback that will make her question everything she’s ever believed in. But Cole—and the rest of their team—refuse to let her go it alone. Even if it means sacrificing their loyalty to KGI, and their lives…