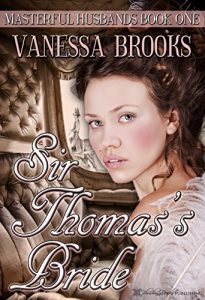 Can a loving hand applied to the naked rear of a peevish woman sweeten her character?

As a Georgian gentleman, Sir Thomas Wiggington expects to be master within his own home; after all, everyone knows that an Englishman’s home is his castle. However, when he weds Lady Margaret Beauchamp, it appears that she has other ideas about who should be in charge. Thomas finds that his patience as a gentleman is sorely tried and tested. Lady Margaret is of a peevish and sour disposition, and she has as low an opinion of her new husband as she has a high opinion of herself! In fact, she is downright furious to find herself married to a mere ‘Sir’, no matter how well- connected Thomas might be.

Margaret dislikes almost everyone and almost everyone, it seems, dislikes her. Sparks fly from the very beginning of their marriage. Margaret quickly discovers that she has misjudged her new husband – he is not the easygoing milksop she first took him to be. When she defies him the moment he carries her across the threshold, she is stunned by his swift reaction in tossing her over his knee. Being soundly spanked was not quite the response she was expecting from the polite man who had courted her so shyly before their nuptials.

Despite her hateful behavior, Thomas deeply loves his new bride. He has absolutely no doubt that he’ll be able to uncover the loving woman he knows lies deep inside the shell that Margaret presents to the world. Under his strict discipline and passionate lovemaking, he hopes to remove the stinger from the wasp that is his bride and find his sweet honey bee.

Disclaimer: Sir Thomas’s Bride is a book of deep passion with elements of harsh discipline and explicit sexual scenes, including figging. If any of these offend you, please do not purchase this book.