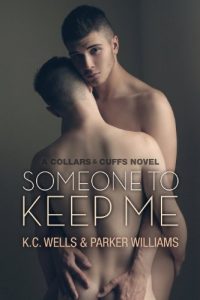 Eighteen-year-old Scott Keating knows a whole world exists beyond his parents’ strict control, but until he gains access to the World Wide Web, he really has no idea what’s out there. In a chat room, Scott meets “JeffUK.” Jeff loves and understands him, and when he offers to bring Scott to the UK, Scott seizes his chance to escape his humdrum life and see the world. But when his plane touches down and Jeff isn’t there, panic sets in.

Collars & Cuffs favorite barman and Dom-in-training, Ben Winters, drops his sister off at the airport and finds a lost, anxious Scott. Hearing Scott’s story sets off alarm bells, along with his protective instincts. Taking pity on the naïve boy, Ben offers him a place to crash and invites him to Collars & Cuffs, hoping his bosses will know how to help. Scott dreams of belonging to someone, heart and soul. Ben longs for a sub of his own. And neither man sees what’s right under his nose.

Get Someone to Keep Me (Collars & Cuffs Book 3) by K.C. Wells, Parker Williams at Amazon
Get Audiobook