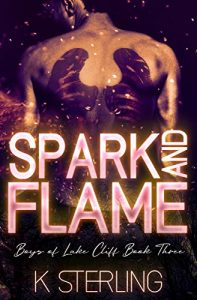 K. Sterling invites you to return to Lake Cliff and catch up with Aiden and Lane in this sequel to Hide And Keep that picks up where Safe And Sound ended.

Aiden and Lane are seven years into their Happily Ever After when Aiden begins to question the strength of their marriage. Gavin Langley and his obsession with Aiden tests Lane in unexpected ways and puts their marriage under media and public scrutiny.

Aiden enjoyed the view of the back lawn and the lake. Especially when it was early spring and unseasonably warm. He turned his chair so he could focus his attention on the activity on the other side of the glass. His lips curved dreamily and heat washed over him as Lane dropped a bag of soil next to a planter. It had become necessary for him to remove his shirt and Aiden knew the research he was attempting was over for the afternoon.
Lane was sweaty and there were smudges of dirt across his stomach and back. He ran his arm across his forehead before reaching into his back pocket. The waist of Lane’s jeans dipped and Aiden’s mouth watered as a hint of the muscular swell of Lane’s ass cheeks were revealed. He bent forward to cut open the bag of soil and Aiden was on his feet. He winced as his eyes locked on Lane’s ass and Aiden’s hand went to the hard-on pushing against the front of his jeans.
Water! He could take Lane some water. Aiden rushed from the study and into the living room and his eyes went back to Lane as he poured soil into the planter. Aiden regretted all the times he wrinkled his nose as Lane discussed his plans for the garden. He still didn’t care about whatever Lane was planting but he could appreciate all the sweating and exposed flesh. A wicked grin pulled at Aiden’s lips as he reached into the fridge for a bottle of water and pictured Lane’s naked ass. Lane was mildly obsessed with his tomatoes and Aiden saw a flash of round, ripe fruit and groaned as he reached for the back door. If he couldn’t get Lane in the shower soon…
Aiden squinted as he stepped out into the sun and Lane smiled over his shoulder. Aiden waved the bottle as he skipped down the steps and onto the lawn and Lane nodded as he tugged off a pair of gloves and Aiden bit his lip to keep from telling Lane to keep them on.
“I thought you could use a break,” Aiden said as he handed the bottle to Lane and he laughed softly as he twisted the cap off. The muscles in his forearm twisted and Aiden felt a little lightheaded as the smell of Lane’s sun warmed, sweat coated, dirt smeared skin flooded his senses.
“I want to get these planters filled so I can return Chief’s truck,” Lane said as his head tilted toward the truck. There were several bags of soil stacked in the bed and Aiden cursed under his breath.
“A quick shower couldn’t hurt,” Aiden muttered and Lane raised a brow before lifting the bottle to his lips. Aiden’s body tightened as Lane’s head tilted back and a drop of water rolled down his chin. Aiden followed it down Lane’s neck and his eyes continued down Lane’s pecs and the ridges of his stomach. He was tempted to catch the drop with the tip of his tongue.
“Why would I take a quick shower now when I’d come out and get even dirtier as soon as I was done?” Lane asked and Aiden’s eyes flicked rapidly as he tried to find a logical reason.
“Ummm… UV rays?” He offered and Lane’s head pulled back.
“What?” He was fighting not to laugh as he stepped closer to Aiden.
“You should probably put on some sunscreen and you don’t want to do that with your skin covered in sweat and dirt,” Aiden said as Lane’s lips twitched and Aiden frowned. It sounded like a real thing. “I read that it’s not just for the summer, you know?” He added and Lane hummed thoughtfully.
“What’s not just for the summer?” He asked as his hand slid beneath Aiden’s t-shirt and splayed against his back.
“Sunscreen,” Aiden murmured as he angled his head and went ahead and groaned as their lips brushed and Lane’s body pressed against his.

Get Spark And Flame (Boys Of Lake Cliff Book 3) by K. Sterling at Amazon