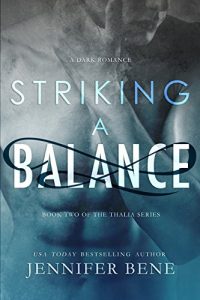 Thalia may be free, but can she learn to live after the darkness?

Thalia and James have just met under the most insane of circumstances. He purchased her at an underground auction from a man who kidnapped her, tormented her, and sold her to the highest bidder.

In their first few months together Thalia wants to view James as her savior, her knight in shining armor that she can stay with in safety, but she can’t escape the trauma she went through and the lingering effects it has caused. James isn’t sure, now that he has Thalia, if he can handle the depth of submission she displays.

Can James help her strike a balance between who she is as a person and her newfound craving for submission, or will her urge to submit swallow her whole until James has no choice but to set her free?