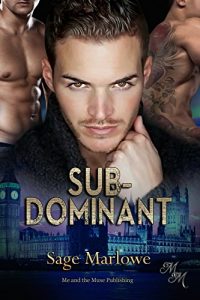 Putting a leash on a dominant sub is a task that may require two Doms to accomplish.

When relocation agent Eric Swann is assigned to ease young Connor Prescott into moving back to London, he expects the boy to be more enthusiastic—and less irritating.

Used to roaming freely among his mother’s D-list celebrity friends, Connor is anything but happy when his father decides to put him on a leash—a leash with a far too attractive handler on the other end. Secretly craving a man who knows how to yank his chain and show him exactly where the limits are, Connor does what he’s best at. He manipulates Eric into giving him what he wants, making the man reveal a side of him that Eric himself isn’t ready to accept.

Trained by one of the quirkiest Dom/sub-teams in the country, Dom Tyler Kane knows exactly how to handle a toppy sub. He keeps Connor on his toes, er, knees, in the bedroom, but when his capricious lover sets his heart on pushing yet another limit, Tyler finds himself not only with a dominant sub but also with a Dom who has yet to accept his true identity.

Reader Advisory: Due to sexually explicit content this book is intended for adult readers only. Contains scenes in which the main characters are sexually involved with secondary characters and vivid descriptions of unusual sexual practices.
While this book can be read as a standalone novel, it is best enjoyed as part of the series in the following order: Sub-Mission, Re-Submission, Sub-Dominant, Sub-Culture
Word count: 60,500

Get Sub-Dominant by Sage Marlowe at Amazon