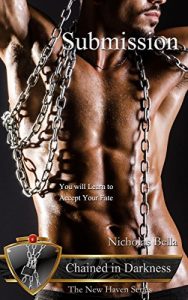 I lay here, exhausted and more confused than when my night first started. I’ve just discovered something else about myself that I wish wasn’t true. Not only do I have to feed on the blood of humans, I’ve also found out that I need the “essence of a man” as Theoden called it, in order to survive. If that isn’t enough on my plate, I know Theoden wants to break me down even more. He won’t be happy until he’s taken every part of me that wants to fight him and crushed it under his foot. He wants me to submit to him and I only pray that I can resist his hold over me.

Warning: This novelette series contains hardcore sexual situations between men, not meant for sensitive eyes. I’m talking crude, lewd and full of attitude. This series will most likely either offend you or get ya revved up. This series isn’t going to be pulling any punches whatsoever, so you’ve been warned. Mature Adult Content meant for readers looking for something dark, taboo, sexy, and unapologetic in their paranormal erotica. This is NOT a romance. This novelette is approximately 18800 words.

Get Submission: Chained in Darkness (Episode Four of Season One) by Nicholas Bella at Amazon