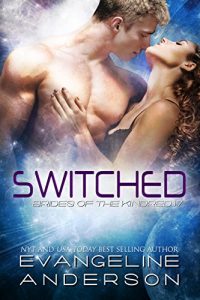 A warrior with a talent that could get him killed
A girl transported to a new existence with no warning
When the two of them trade lives, it places them in mortal peril.
Not to mention really screwing up their love lives!
Will they ever be able to get back in their rightful bodies?
Or have they been forever…Switched?

What happens when you wake up in someone else’s body?
And what if that someone happens to be a huge, hot, Alien warrior?
Frankie is about to find out…the hard way.

Kerov knows his people used to have the ability to Switch bodies with their bonded mates, but he has no idea who the girl in his head is. And the fact that she’s controlling his body goes beyond awkward…it could be lethal if anyone finds out. On his home planet of Tarsia, Switching is a crime punishable by death.
But there are worse things than dying as he finds out when he gets stuck in Frankie’s body as well. What is a Brazilian bikini wax anyway? And why does he have to remove his pants to get one?

Will Frankie and Kerov ever get back to their own bodies? And what do the steamy dreams they’ve been sharing have to do with their destinies? You’ll have to read Switched, Brides of the Kindred 17, to find out.