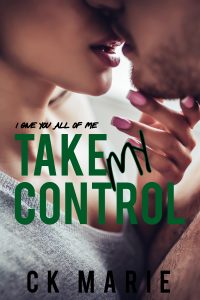 About Take My Control:

When people look at me, they probably think I’m just an average Joe. They don’t see a man who owns a successful construction company and has enough money to make most rich men cringe. And they definitely don’t see a dominant man who goes home to three beautiful women every night.
My days are on repeat, like a scratched album that plays the same words over and over. At both work and home, the words “Yes, Sir” and “No, Nir ” is all I hear.
I control every second of every day.
Most men would kill to have what I have. Hell, back when I was eighteen, I would’ve killed to have this life. But now, I need a change, one that will move that needle and start a new song.
I need someone to take control.

REVIEWS –
5 Stars – The Erotic Book Review
When I have no words, that tells me that a book has taken me to a place where I forget reality, where I can go and revel in the essence of each character and wrap myself in their lives. Watching as each of their stories unfold.
The character development was done in a way that when the story was in the present, you could feel the depth of the relationship between Jordon, Tori, Lyla, and Carrie. Yes, the relationship is unorthodox, but they fulfilled a need in each other, they developed an unbreakable trust that helped them heal from past hurts, and there was a safe space for them to be uninhibited and free in their lust. It was the perfect symphony. Even in perfection, there’s a glitch.
Cue the music for Maria, the woman that would change the game, make a Dom want to kneel, and make a tortured soul rethink her entire world. Maria is a force that commands everyone to obey. It’s hard to write this without giving spoilers, but I will say that she is my Spirit Animal.
The heart will always tell you what is missing in your life and in a brief moment, it can find what it needs and will not rest until that very thing is in its possession. Jordon was in control for so long and he loved how Tori, Lyla, and Carrie responded to him, his commands, the way they were all so in sync, but he needed a twin soul to take control and allow him to be commanded and give instead of take.
Jordon and Maria were music without lyrics. They were souls who created their own emotions that demanded cooperation from everyone in their presence. You don’t have a choice but to fall in line as they lead you, because they set the pace of a journey so filled with mind-blowing, blinding lust that it is borderline torture. CK Marie did an amazing job bringing life to this story. The feelings that ran through these characters emanated from the pages and burrowed into me so deep that I was breathing hard with every climax, panting with every delicious tease, and crying during the heart-ripping scenes. This was so raw and pure….magical and delightful…lust-filled and erotic. I’m rarely left speechless, but this book without a doubt is my book of the year. From Jordon’s beginning to the climactic ending, you will not be disappointed.

5 Stars – Goodreads Reviewer
Jordan Conners spent his whole life trying to please his family by helping run the family business. He was leading a life that wasn’t his; one he had no control of. At 25 years old, he decided it was time to man up and live the life of his choosing; to take control and find his own happiness.

The story picks up 21 years later in Del Rapids South Dakota, where Jordan runs his own construction business and leads a rather unconventional lifestyle with three women, Tori, Carrie, and Lyla who obey his every command.

For most men, this would seem like a dream come true, but for Jordan, something is missing. The girls fill his heart but there is an undeniable void that plagues him. There is a part of him that searches for more; a piece that is missing.

Little does he know that that something may just have walked into his office, in the form of a potential client named Maria Dregon. Instant Sparks fly for Jordan and she ignites something in him he can’t quite place.

Not only is she smart as a whip and feisty, she is a force to be reckoned with. She is beautiful, strong, independent, and has this air of confidence about her but will she be what Jordan is searching for? Or will her assertive personality be too much for Jordan?

CK Marie made you emphasize with all of her characters by showing us where they came from and giving us a full understanding of how hey got where they are today.

Carrie and Lyla started off as young friends that turned into something more. They have a chemistry that is undeniable and a bond that is untouchable. You can feel how in love they are because it emanates right off the pages!

Then there is Tori. She really stands out to me. As a child, she was abused by a lot of men including her father and she became a runaway at 16. She is shattered, damaged, and broken. She enjoys the pain of the whip because it reminds her she is a survivor and that her past is real and of how far she has come. She went from a scared little girl to a life on the streets just trying to get by, to the current situation she finds herself in with Jordan and the girls in a safe and loving relationship. To me, she has come full circle and it’s captivating to watch. To watch her figure things out on her own while finding herself and her worth in the process is beautiful.

Maria, on the other hand, is the opposite of Tori. She exudes confidence and knows what she wants and will let nothing stop her from getting it. She is in control and that intimates most men but most men aren’t like Jordan.

It was exciting to see how the dynamics changed as the characters developed. It was a tug of war on my emotions as Jordan and Maria fought for dominance and how easily they both gave up control to each other. She put a Dom on his back and to his knees, while he claimed her for himself.

I felt the numbness and them coming alive. I felt the dominance Jordan established and him spiraling down as he was losing control. CK Marie opened my eyes to a whole new world and the ups and downs that come with it.