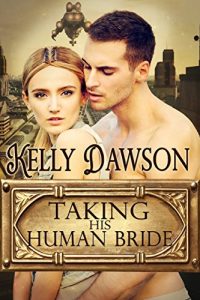 Less than a day after two gruff military officers escort her to a government facility, Melissa Malone finds herself leaving the planet on a newly-built spacecraft heading for one of the moons of Jupiter. Unknown to most of the world, an asteroid is hurtling toward Earth and, due to her unrivaled computer skills, Melissa is one of a select group of people chosen to rebuild civilization should humanity prove unable to avert the approaching cataclysm.

Melissa’s situation rapidly goes from bad to worse when the ship is attacked and she is captured by what she can only assume are aliens. After a thorough medical examination, Melissa is given as a bride to a man named Damian. As she soon learns, the handsome officer has laid claim to her for a reason. Damian is on a mission, sent by the leaders of his world to infiltrate and bring to justice the band of renegades who took her captive… and he needs her help.

Despite Damian’s willingness to spank her soundly for any disobedience, Melissa cannot help delighting in the way her body responds to his touch, and his skillful, dominant lovemaking brings her to heights of passion she never imagined possible. But when the time comes for Melissa to put her abilities to the test with the fate of the Earth on the line, can she outwit a rogue computer expert and prove that Damian’s trust in her was well placed?

Get Taking His Human Bride by Kelly Dawson at Amazon