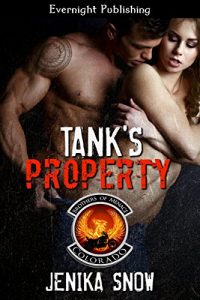 Tank loved Bunny, but she ran from what they could’ve had. Now, years later, she’s still the only woman that holds a spot in his heart. A member of The Brothers of Menace MC means he’s had to move on and focus on the future. But when he finds out Bunny and his sister, Lila, may be in trouble, he’ll go to any lengths to make sure they’re safe.

Bunny’s abused past made her leave the only man she’s ever loved. But everything since then has been void of life, and she knows it’s because she doesn’t have Tank. He’s the only one that’s ever made her feel like she deserves more.

But when they’re finally together will the past keep them apart? With a psycho after them, Tank knows Bunny is the only woman that was meant to be his. That means he’ll walk through hell if he has to in order to make her his.