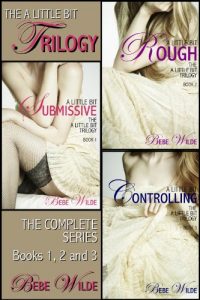 From Bebe Wilde, author of Adults Only and Sex Story, comes the A Little Bit Trilogy and it’s now available in a single volume.

This bundle includes the following books:

A LITTLE BIT SUBMISSIVE: Teagan Finney is a top real estate agent in Los Angeles. But when the market crashes, so does her career. Soon, she is faced with one of the biggest challenges of her career — selling the multimillion dollar home of handsome, super wealthy actor and entrepreneur, Roman, who she finds both daunting and intriguing. However, she gets more than she bargains for when the house doesn’t sell and he decides to take matters into his own hands.

A LITTLE BIT ROUGH: In the second book of the A Little Bit Trilogy, Teagan is in the process of selling Roman’s multimillion dollar home and hits a few snags when her brokers open doesn’t go very well. After Roman voices his displeasure about this, an argument ensues that is followed by the hottest sex she’s ever experienced. However, to complicate matters, her movie star ex-husband is suddenly back in the picture and wants her back. But can she trust him? Or does she want to find more out about Roman, who is offering hot sex and domination?

A LITTLE BIT CONTROLLING: The final installment of the A Little Bit Trilogy begins with Roman and Teagan wanting to move forward with what they are feeling towards each other. However, when Teagan begins to feel insecure about her feelings for Roman, she finds herself wanting to go back to her movie star ex-husband. But will she be able to give him a second chance or will she finally submit to her desires and claim Roman as her own?