You are here: Home / Bestseller / The Alpha Warlocks’ Claim 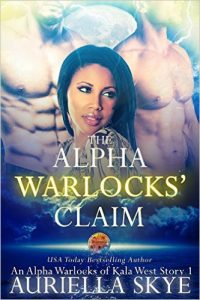 Taking multiple lovers is a family tradition. Hell, it’s a witch tradition, but Charice Brixton isn’t having it. She doesn’t have time for a man, let alone two powerful warlocks. She’s perfectly fine running her magic shop in Kala West, Florida with her sisters.

Until she’s forced to attend the Firewick Festival, a biannual gathering with stuffy board members overseeing the match of witches and warlocks in hopes of creating the perfect triad. Magical speed dating at its finest. Charice would rather have a root canal. She’s willing to use her powers to keep from going, even if it means the wrath of those in charge. That is until two hotter-than-hell men walk into her shop and alter her plans.

This 13,000+ word story is the first of the Alpha Warlocks of Kala West interlinked series but can be read as standalone. It has strong sexual situations and explicit content. Mature and brave readers only.

Get The Alpha Warlocks’ Claim at Amazon