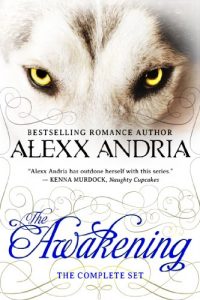 In Alexx Andria’s THE AWAKENING (The Complete Set) a love so fierce it has fangs sends two impossibly different people on a journey toward a life-changing fate that will either save the world or destroy it.

There is no escaping destiny — and it’s coming straight for Cassandra and Tieran whether they are ready for the consequences or not.

Alpha werewolf Tieran doesn’t want Cassandra for his mate but he can’t seem to help himself when he’s around her. The pull is too strong to fight, the attraction soul-deep.

Cassandra doesn’t want anything to do with werewolves or the prophecy, particularly when it seems that every time she turns around, someone is either trying to control her life or end it. And now she’s destined to be with Tieran, an Alpha with a seriously bad attitude? No thank you.
She’d rather just go back to her boring life and forget all about prophecies, a previously unknown paranormal world, and definitely the werewolf who sets her teeth — and blood — on edge.

If only that were possible.

Caught between two warring werewolf clans, and carrying two babies, one potentially evil and the other the possible savior of the world, has no choice but to follow her destiny straight into Tieran’s hard, muscled arms or else face a future where nothing but death is certain for the human race.

When the fate of the world is at stake, everything else pales in importance…even love. But Cassandra and Tieran discover that love might be what saves them all.

Get The Awakening (The Complete Set) by Alexx Andria at Amazon