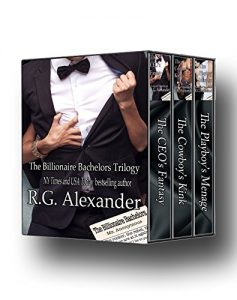 Glass slipper shopping can be a dangerous pastime…

The CEO’s Fantasy-Book 1
Dean Warren is the billionaire CEO of Warren Industries. He’s spent the last five years proving his worth and repairing his family’s reputation. But the rules he’s had to live by are starting to chafe, especially when it comes to one particular employee. He doesn’t believe in coincidence, but when Sara Charles shows up suddenly unemployed and asking him to agree to a month of indulging their most forbidden fantasies–there’s no way he can refuse.

When reality is better than his wildest dreams, will the CEO break all of his own rules to keep her?

The Cowboy’s Kink-Book 2
Tracy Reyes is a man who enjoys having control. Over his family’s billion dollar land and cattle empire, over the women he tops at the club, and over his life. When teacher Alicia Bell drops into his lap with a problem that needs solving and a body that begs to be bound, he can’t resist the opportunity to give her the education in kink she needs. But can he walk away from his passionate pupil when it’s time to meet his future bride?

The Playboy’s Ménage-Book 3
Henry Vincent and Peter Faraday have been friends forever. The royal rocker and polymath playboy have more than a few things in common. They’re both billionaires, they both love a challenge…and they’ve both carried a long-lasting torch for the woman that got away. Finding Holly again brings back feelings and memories neither one of them wanted to face. But they’ll have to if they want to share her. Keeping her from running again and making her admit how she feels about them will take teamwork. Hours of teamwork…and handcuffs.

The Bachelors
We know every debutante’s mama wants a piece of their action, but if you could choose without repercussions, which of the Billionaire Bachelors would be your fantasy? The true hardcore cowboy who has enough land and employees to start his own country, but no dancing partner for his special kind of two-step? The musician with a royal pedigree, a wild streak and a vast fortune at his disposal, who’s never been seen with the same woman twice? His best jet-setting buddy who can claim no less than five estates, four degrees and three charges of lewd public behavior on his record? Or the sweet-talking, picture-perfect tycoon-cum-philanthropist who used to be the baddest of the bunch but put those days behind him when he took over as CEO of his family’s company? (Or did he?)
Pick your fantasy lover–rocker, rancher, rebel or reformed rogue. Glass slipper shopping is a dangerous sport to be sure, especially with prey as slippery as these particular animals, but I’ll still wish all my readers happy hunting.
From Ms. Anonymous

Get The Billionaire Bachelors Trilogy by R.G. Alexander at Amazon