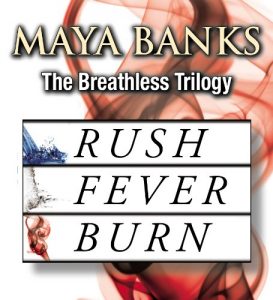 THE COMPLETE BREATHLESS TRILOGY IN AN IRRESISTIBLE BOX SET.

RUSH… When Gabe Hamilton saw Mia Crestwell walk into the ballroom for his hotel’s grand opening, he knew he was going to hell for what he had planned. After all, Mia is his best friend’s little sister. Except she’s not so little anymore. And Gabe has waited a long time to act on his desires.

FEVER… Jace, Ash, and Gabe: three of the wealthiest, most powerful men in the country. They’re accustomed to getting anything they want. Anything at all. For Jace, it’s a woman whose allure takes him completely by surprise…

BURN…When it comes to sex, Ash McIntyre has always explored his wilder side—extreme and uncompromising. He demands control. And he prefers women who want it like that. Then he meets Josie. He never imagined the one woman to tell him no would be the only woman who’d ever drive him to the edge of desire.

Get The Breathless Trilogy by Maya Banks at Amazon