You are here: Home / Genre / African American / The Chase I (Double XX Book 1) by Xyla Turner 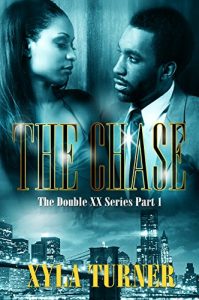 Xena is an independent woman who recently started her own school in Brooklyn, NY. She is an introvert, does not go out much, but receives sexual maintenance from a neighbor whenever she wants. A chance meeting with Xavier, who is a rich play boy that likes to invade her space, bite and spank her. Xavier is a venture capitalist, who owns many businesses, buildings and has ties with people all around the country. He is used to getting what he wants from women and despite Xena’s defenses; he seems to wiggle in and momentarily traps her under his spell.

After their first meeting, Xena spent most of the time running away, but still somehow felt drawn towards him. Soon she gave in, liking that Xavier was possessive and showed her an abundance of interest. However, there were several times where he crossed the line. Eventually, his possessiveness goes from endearing to overbearing, and trust becomes an issue. Needing space, Xena heads out of the country to clear her mind. However, on her return she learns of Xavier’s hidden secrets that put her safety in jeopardy.

Will Xena be able to forgive and forget the wrongs that have been committed against her privacy? Will Xavier become the man that Xena needs and win the battle between lying to her again and telling her the truth? Will he risk giving up his obsession to possess her in order to prove how he truly feels?