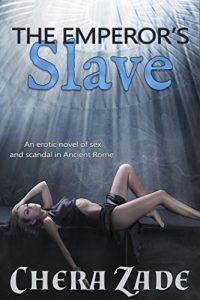 I’ve done it! I’ve saved the life of the great Emperor Caligula. Imagine me, a lowly servant-girl of just nineteen summers, bringing this mighty man back from the brink of the underworld?

He repays me as only a God-in-Earth can, by inviting me into his chamber. But I am still innocent. I know nothing of the world of sensual pleasure that awaits me behind his gilded doors. All I know is that beyond them lies the most powerful man in the world and his retinue of handsome soldiers, senators, and gladiators, all ready to torture and pleasure my body until I scream for release.

Get The Emperor's Slave by Chera Zade at Amazon