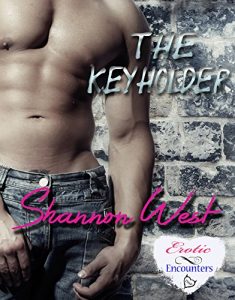 Cody McCall woke up in a hospital with no immediate memory of how he got there. He did remember being on vacation in Florida and getting epically drunk, but after that things were pretty much a blur. When he’s realizes on suicide watch and that Jake Rogers, his best friend and his partner on the police force back home, is sitting by his bedside, things become even more confusing.

And then it all comes back to him—how he’d had too much to drink and decided to try something he’d seen on the internet involving ropes. A passing maid saved his life, but now he’s strapped to a bed and his best friend is more angry with him than he’s ever been. Jake manages to get Cody sprung from the hospital, but Cody’s not out of the woods, by any means.

Jake has something planned for Cody that will not only keep him safe, but also keep him firmly under Jake’s control.

AUTHOR’S NOTE: I wondered what would happen if two people who had been best friends discovered they were in love, but one of them was a Dom. What would that journey look like? Would they be able to make it as a couple? This series chronicles that journey, with both Cody and Jake having to find their way. I decided to serialize their story to show the slow progression of a complicated relationship. This relationship happens to be a D/s coupling, but I think any new love story has potential pitfalls and requires a lot of give and take.

Get The Keyholder by Shannon West at Amazon
Get Audiobook