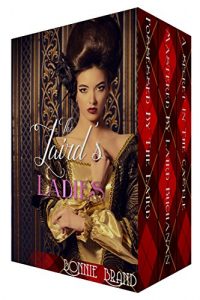 Three lusty ladies in search of love from their Lairds!

1. POSSESSED BY THE LAIRD

When beautiful and shy Karyn McGregor is sold as a servant to the wealthy Laird of Oban, she is terrified that she won’t be able to keep up with his demands. With the Laird’s reputation for perversion, she is also a little worried that he might ask her for more than she can politely give…

But when she begins working for the masculine, commanding figure of the Laird, she feels her defenses wear away, and even begins becoming a little braver around him as her affection for him grows.

On her eighteenth birthday, he gives her a special present that she must wear for him, while the strong hand of his corporal discipline teaches her what it will be like to take her new place in the Laird’s castle: no longer as his humble servant, but now as his obedient wife.

On their marital bed, the Duke will show her what it means to marry a true Scotsman with carnal pleasures, and Karyn will be ready to become a woman. But even though she’s a woman, that won’t stop her wanting to play with toys…. Soon, she’ll play whatever game the Laird of Oban wants her to.

Elspeth Fraiser, an inexperienced young maid from Argyll, works for the enigmatic, stern Laird Buchanan. One day, after stumbling into a part of the manor she’s not allowed to go to, she sees something so twisted that changes her forever.

She knows she’s in trouble when she’s spotted by the Laird, and his swift, hard punishment leaves her in no doubt of his intentions: he wants her to provide him with an heir, and he’s going to do it hard and without protection.

3. A SECRET IN THE CASTLE

Then one night Tom’s wishes come true, and he is a stallion that can’t be tamed… Lady Isobel MacAllister is in for the ride of her life!

Get The Laird's Ladies by Bonnie Brand at Amazon