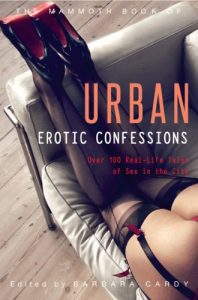 True stories of temptation and seduction from the big city ? spanking, domination and submission, group games, and every other kind of downright rude and kinky fuckery you can imagine, as well as some you probably can?t.

Barbara Cardy has once again done a fantastic job of ruthlessly whittling down literally thousands of submissions to this collection of well over 100 sexy secrets. There are no categories; to an open mind, each confession has the potential to seduce.