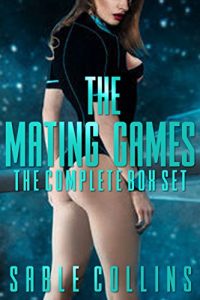 Luna has no idea the twisted debauchery that these Aliens have in store for her..

The Mating Games Series is made up of 3 books:

Luna never wanted to go into space. But life can play tricks on you sometimes.

Struggling for a living, working two jobs and living in a run-down apartment in a rough part of the city, her life is stuck in a rut.

Then, one night, something strange happens to Luna, an unexpected encounter that will set in motion an extraordinary adventure and change her life for ever.

Trapped on an alien spacecraft, Adira is resigned to her fate, but Luna is determined to escape.

Her determination grows after they witness the cruel treatment that the aliens give to another of their slave girls.

But before she can put her plan into operation, Luna must fight for her new friend and face one of her darkest fears.

On the run in the alien spacecraft, Luna is forced into an act that she would never have imagined herself capable of.

But as she discovers in the corridors of that ship, and in the arena, desperate situations can warp and shape a person in ways that can scarcely be believed.

Will she be able to escape and will she ever be the same again?

Get The Mating Games : The Complete Box Set by Sable Collins at Amazon