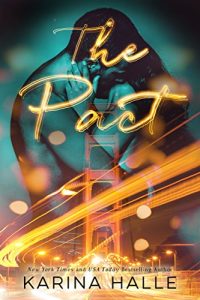 On the New York Times Bestsellers List for Four Weeks in a Row!

*The Pact is a FULL-LENGTH
*STANDALONE (not part of a series, no cliffhanger, fully wrapped-up novel)
*”FRIENDS-TO-LOVERS” CONTEMPORARY ADULT ROMANCE

It all started with a pinky swear…

Linden McGregor is tall, rugged, and gunslinger handsome; a helicopter pilot with a Scottish brogue and charm to spare. He’s also one of Stephanie Robson’s best friends and has fit into that box for as long as she’s known him.

Beautiful, funny and an ambitious businesswoman (with one hell of an ass), Stephanie Robson is one of Linden McGregor’s best friends and has fit into that box for as long as he’s known her.

Back in their mid-twenties and tired of the competitive hit-or-miss dating scene of San Francisco, Steph and Linden made a pact to marry each other if neither one of them were in a serious relationship by the time they hit thirty.

It sounded like fun and games at the time but as the years to thirty tick past and lovers come and go out of their lives, the pact becomes larger than life.

Sex is inevitable. Friendships are tested. Hearts are on the line.

The pact is about to change everything.

Note: due to the dirty talk and sexy times, The Pact is not meant for anyone under the age of 18. All characters in THE PACT are in their thirties, therefore this is NOT a new adult book…even though love can mess you up at any age.

Get The Pact by Karina Halle at Amazon
Get Audiobook