You are here: Home / Price / 99 Cents / The Renegade’s Woman by Nikita Black 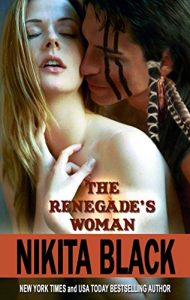 Sally Hewitt climbed into a covered wagon and headed West for a new life, praying she wouldn’t run into any hostile Indians along the way. She’d heard what happened to innocent female victims at their hands… Imagine her surprise when she found she quite liked being captured by the handsome Arapaho renegade, Standing Bear. His talented hands were anything but savage or cruel, teaching her forbidden pleasures, coaxing reactions from her body that her heart she never dreamed possible.

Standing Bear is one of the Badger Men, renowned warriors sworn to fight the encroaching white man or die trying. But he cannot resist the woman he calls Pale As Moonlight, the woman who stirs his very soul. But how can he take her, when to do so would mean the end of his people?

Their forbidden love threatens to spark a war, even as it ignites the desires of two desperate hearts.

Get The Renegade's Woman by Nikita Black at Amazon