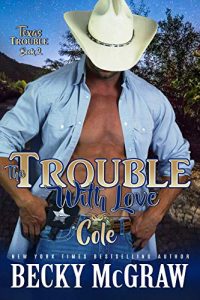 After her husband was killed in the line of duty, Detective Sabrina Roberts devoted her sole focus to her job to make sure the same doesn’t happen to her. Two years later, Sabrina is near burnout and searching for an out. It comes in the form of an invitation to stand in her friend’s wedding out in the country where she might have time to breathe and re-evaluate her life.

Once she’s there, however, Sabrina barely has time to take a breath before she’s back in cop mode. Someone wants the bride dead and she’s determined that is not going to happen. Cole Jackson, the town’s sexy, but sexist sheriff, is in investigative mode too and quickly tells her to stand down. He doesn’t want or need her help on the case, because he thinks women have no place in the field.

Sabrina sets out to show him exactly what a policewoman could do and prove that her big city police department experience gave her far superior skills to that of a podunk town sheriff. But she quickly loses interest in the competition. Surprisingly, the too-handsome-for-his-own-good sheriff makes her want to put away her pistol and bake biscuits for him and to demonstrate an entirely different skillset—in the kitchen and the bedroom.

Will letting down her guard and allowing herself to love a lawman again be the final nail in the coffin of her sanity? More importantly, will distracting him mean they’d be attending a funeral instead of a wedding?

**NOTICE** This book has a new cover, but the story and content have not changed. All of the books in the Texas Trouble series can be read standalone.

Get The Trouble With Love: Texas Trouble Series Book 2 by Becky McGraw at Amazon