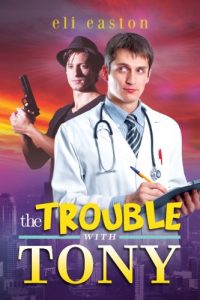 Sex in Seattle: Book One

As part of the investigation into the murder of a young woman, Seattle P.I. Tony DeMarco poses as a patient of Dr. Jack Halloran, the therapist who treated the victim at a Seattle sex clinic. This isn’t the first time Tony has gone undercover, but it’s the first time he’s wanted to go under cover with one of his suspects. He can’t help it—Jack Halloran is just the kind of steely-eyed hero Tony goes for. But he’ll have to prove Halloran’s innocence and keep the doctor from finding out about his ruse before he can play Romeo.

Dr. Halloran has his own issues, including a damaged right arm sustained in the line of duty as a combat surgeon in Iraq and the PTSD that followed. He’s confused to find himself attracted to a new patient, the big, funny Italian with the puppy-dog eyes, and Tony’s humor slips right past Jack’s defenses, making him feel things he thought long buried. But can the doctor and the P.I. find a path to romance despite the secrets between them?