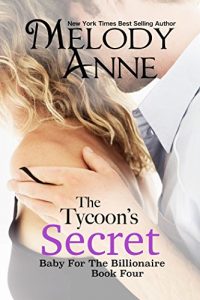 Damien grows up fast and conquers the business world, going from a homeless boy to a billionaire bachelor. He has no time for love in his quest for righting wrongs of the past. What he doesn’t know is that love isn’t something he can hide from.

Sierra grew up with a monster of a father after losing her mother at the tender age of six. Her dad punishes her for sins he assumes his deceased wife made against him. Finally, her father does a business deal with Damien Whitfield, selling Sierra to the highest bidder.

Damien and Sierra may both be running from old demon’s and forging ahead to what they think are their perfect futures, but fate has a way of changing everything. Take the journey with Damien and Sierra as they fight a passion that won’t be denied.

Get The Tycoon's Secret (Baby for the Billionaire, Book 4) by Melody Anne at Amazon
Get Audiobook