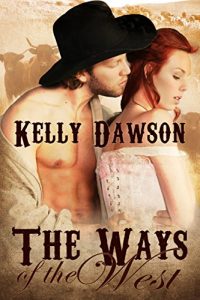 Orphaned by an attack on her family’s wagon train, Jessica finds herself stranded a thousand miles from Boston, the only home she has ever known. Only one man—a rough, dusty cowboy named Johnny—stands between her and the perils of the West, and he quickly makes it clear that he is ready to do whatever needs to be done to keep Jessica safe… whether she likes it or not.

When the unlikely pair stumble upon a cattle drive and they are offered employment, Johnny doesn’t hesitate to accept. But after Jessica loudly expresses her disdain for his plan and for cowboys in general, Johnny decides it is time for drastic action. After a hard, embarrassing spanking followed by a tearful apology to the trail boss, Jessica is left with both a sore backside and a strange yet undeniably powerful need to be held close and comforted by her handsome protector.

With Johnny by her side—and claiming an ever bigger place in her heart with each passing day—Jessica begins to adjust to life on the trail. But a cattle drive is a dangerous place for anyone, let alone a city girl with a penchant for disobedience. If he ever wants the chance to make Jessica his wife, Johnny knows he’s going to have to take her firmly in hand before she gets herself hurt or killed. Even if it means a painful, humiliating bare-bottom strapping she’ll never forget, one way or another he’ll teach her the ways of the west.

Get The Ways of the West by Kelly Dawson at Amazon