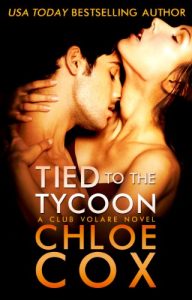 TIED TO THE TYCOON is an emotional romance about the one that got away, and the ways we stay tied to each other over the years despite our best efforts. It contains mature themes and content perfect for fans of the Crossfire series and Fifty Shades of Grey, and some unconventional uses for rope, the outdoors, and a roof…

Ten years ago, tech entrepreneur Jackson Reed broke Ava Barnett’s heart. As best friends in college they each had their reasons for guarding their hearts, but when they finally let go, things were perfect for one night—and then Jackson screwed it all up.

Since then, he’s never forgotten her, and she’s tried her best to forget him. Jackson has become one of the most sought after Doms in the city, and Ava has pretended she’s never had a submissive thought. Which suits Ava just fine: after a hard decade of dating in New York, she’s decided she’s done with relationships, and she’s done with getting her heart broken.

But at a Club Volare engagement party, Jackson catches sight of the one who got away: Ava. One quick wager later, and Ava is massively in his debt. To pay it off, she’ll agree to do what she wanted to do all along—be his submissive for one week.

Jackson Reed has spent ten years becoming the man Ava Barnett deserves. They’ve been tied to each other all this time, whether she knows it or not. Now he’s got one week to show her that she’s the only woman he’ll ever truly love—and the only one he wants to dominate.