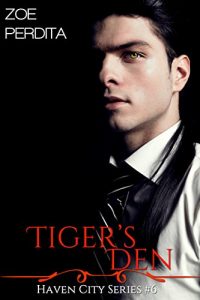 Milo, an omega wolf, always stayed on the sidelines. He’s a hacker—not a badass.

Then Milo is unceremoniously thrust into the middle of the Tiger’s den as a nark (for the cops) and a spy (for the Black Wolves). Not to mention the dead sexy Tiger leader, Xian Fei, insists Milo stay by his side at all times.

Fei clawed his way to the top of the Tigers after years of serving the desires of others. He’s close to ruling his gang in peace, if he can protect the hot little wolf in his care. Problem is—Fei’s not sure he can keep his paws off Milo.

Passion burns between Fei and Milo, but will the lies and twisted loyalties tear them apart before they find a happy ending?

Contains a gay for you / out for you romance with fated mates between a tiger shifter and an omega wolf and includes graphic gay sex.