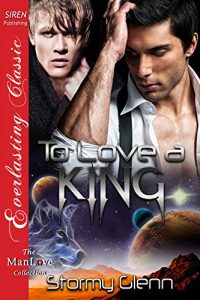 [Siren Publishing: The Stormy Glenn ManLove Collection: Erotic Alternative Paranormal Sci-Fi Romance, M/M, shape-shifters, HEA] Elves are from Venus, wolf shifters come from Mars, vampires are from Saturn, and humans live on Earth… and one man is king of them all… and being the king of the universe has its advantages. Learning he was king of the universe was traumatic, but Nicky learned to deal with it. He even learned to deal with the fact that his lover was more than he was before. But, apparently, someone else is interested in what Cooper has become and they need Nicky out of the way to get to him. When someone goes after Nicky with a psychic attack, Cooper is beside himself. This is something he doesn’t know how to fight. But there might be someone who does, and he’s the High Priest of Mars. Cooper just doesn’t know if the monk can be trusted or if he has his own reasons for wanting to meet him. When the attacks on Nicky turn deadly, Cooper does the only thing he can. He sends Nicky away. But not even the distance between them can keep him from loving his king. ** A Siren Erotic Romance