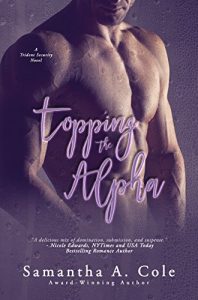 Getting involved with your brothers’ friend and employee is never a good idea, but after being dominated by Jake Donovan for one night, Nick Sawyer wants more. A Navy SEAL, Nick’s been the alpha in every relationship he’s ever had, but now finds himself craving to submit to Jake again. The problem is Jake’s determined that will never happen.

Thrown together to help a girl in danger, Nick starts breaking through Jake’s defenses, but when things go awry, Jake must confront the ghosts from his past before he can ever think about a future. Nick just hopes that future includes him.

Get Topping the Alpha: Trident Security Series by Samantha A. Cole at Amazon
Get Audiobook