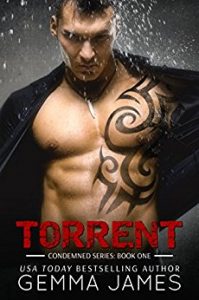 I’ve been obsessed with Rafe Mason since I was thirteen. The twisted part of this story is that I still want him even now that he’s holding me captive on an island.

Rafe has his reasons for doing what he’s doing, and if I’m honest, I can’t blame him. I’m the girl who sent him to prison for a heinous crime he didn’t commit.

But now he’s free and the tables have turned…now he’s the one driven by obsession.

TORRENT is a dark romance with disturbing themes and explicit content, including sexual scenes and violence that may offend some. Intended for mature audiences.

Get Torrent (Condemned Series Book 1) by Gemma James at Amazon