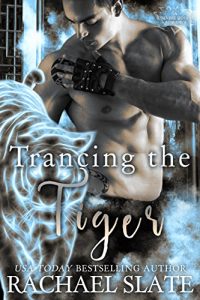 An alpha tiger shifter. The sassy rabbit shifter he can’t keep his paws off. Things are about to get wild.

After the Red Death devastates the world, Lucy Yeoh flees to the tropical safe haven of Malaysia, straight into the arms of Sheng. Who just might be as delusional as he is sexy. Sheng claims only twelve Chosen warriors of the Chinese Zodiac can restore balance to the world and save humanity, and she’s one of them: the Rabbit. Long furry ears and fluffy bunny tail included.

Li Sheng leads the Chosen, and that means commanding Lucy’s Rabbit to submit to his Tiger. Easier said than done when she undermines his authority at every turn, and seduces him to the limits of his darkest desires. But wait until she makes his Tiger roar…

Trancing the Tiger introduces a hot new breed of shifters, set in a post-apocalyptic world where Chosen warriors must battle demonic forces–and the desires of their hearts–to restore the balance of yin and yang before humanity is destroyed forever.

If you love dirty-talking alpha heroes, tough heroines who challenge them, exotic cultures, and unique twists on mythology, don’t miss out on this scorching hot series.