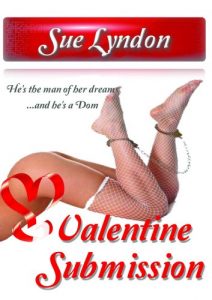 Desperate for some peace and quiet after an ugly divorce, Anne escapes to the beach for an impromptu vacation. But instead of r&r, she finds unexpected passion in the arms of a longtime friend, Jack, who happens to be a widowed Dom. Anne is open to his lifestyle and asks him to teach her submission. But when she realizes she’s lost her heart to him, things get complicated. Not only is she due back at her job in two weeks, but she fears competing with the memory of Jack’s wife. Maybe it’s not meant to be.

Anne’s sweet submissive nature brings the Dom in Jack to life, and he finds the first happiness he’s known in a long time. He plans a special surprise for her in his playroom on Valentine’s Day – only to discover she’s left without saying goodbye. The chase is on. If Anne thought she could leave him that easily, she’d better think twice…

Get Valentine Submission by Sue Lyndon at Amazon