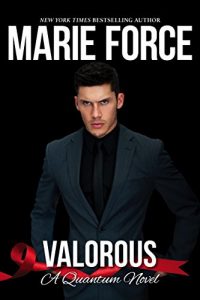 NCLUDES a TAME version of Valorous IN THE BACK of the STEAMY version!

He’s a sexual dominant. She’s sworn off sex. There’s no way they can make a relationship work—or can they?

After surviving a traumatic event at age fifteen and the ensuing estrangement from her family, Natalie Bryant has worked for years to reinvent herself into the woman she is today—a happy teacher fresh out of college and enjoying her first winter in New York City with her faithful dog, Fluff, by her side. Natalie isn’t expecting her life to change completely during a routine stroll through Greenwich Village on a blustery January day. But when Fluff breaks loose and charges into a park, Natalie gives chase and crashes into her destiny. Only after Fluff bites and draws blood from the man who accidentally knocked Natalie down does she realize Fluff has bitten the biggest movie star in the world.

He has no business being enthralled by the gorgeous, young, innocent teacher…
Natalie captivates Flynn Godfrey from the first moment their eyes meet while she is lying on the ground and he’s fighting off her ferocious little beast of a dog. The only thing Flynn knows for certain is if he lets Natalie get away, he’ll regret it for the rest of his life. After only a short time in her presence, Flynn is prepared to change who he is to be what she needs. He knows he’s in big trouble when she says she won’t sleep with him and he doesn’t care if it means he gets to keep her in his life. But can he turn his back on the lifestyle that has defined him? Can he deny the desires that drive him to give Natalie the introduction to love and romance she so deserves? And most of all, can he keep his truth hidden from her long enough to have forever with her?

Join Flynn and Natalie as their story unfolds in three full-length books released three weeks in a row: VIRTUOUS, VALOROUS and VICTORIOUS. From New York to Los Angeles, from Hollywood to Las Vegas, Flynn and Natalie’s whirlwind love affair has it all—romance, passion, steamy hot sex, relentless paparazzi and a murder that could be their undoing.