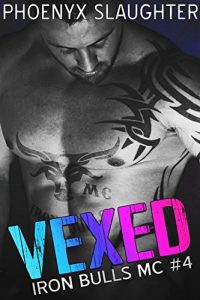 Falling in love will only leave you vexed.

Recent high school graduate, Athena Vale might seem bubbly and uncomplicated, but she has big plans and even bigger dreams, she’s only ever shared with her best friend, Karina. Athena’s strict upbringing has left her curious about taking a walk on the wild side—just once. And she knows exactly who she wants to go wild with.

President of the Iron Bulls MC, Reed “Romeo” Crownover has no shortage of women willing to entertain him. But these days, there’s only one girl on his mind —Athena. When she shows up at his clubhouse on the night of her eighteenth birthday, he decides it’s time to work her out of his system.

She’s half his age.

He doesn’t fit in her world.

She’s leaving for Los Angeles to start a new life in a few days.

Their connection was vexed from the start.

Vexed is the fourth novella in the Iron Bulls MC series. Although Romeo and Athena make brief appearances in the first three books, Vexed can be read as a stand-alone. It does not end on a cliffhanger.

Get Vexed (Iron Bulls MC #4) by Phoenyx Slaughter at Amazon