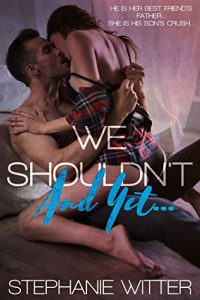 What happens when you’re attracted to the wrong person?

I didn’t expect to feel so drawn to my best friend’s father when I first meet him.
It’s unexplainable and most of all, it’s unexpected. He drinks too much, is rough around the edges, and is so obviously into casual sex and nothing more, but there’s just something about him that calls out to me.
I’ve thought my heart was battered beyond repair, but maybe I have been wrong.

“There was something so sexual, so carnal, so intense in the way Jensen looked at me.’’

She is my son’s best friend and I know he wants more, but I can’t help it. Whenever she is around or her name is mentioned I’m turned on. I’m not used to denying myself to feeling so strongly for a woman so young, but she gets me.
I can’t do a damn thing to stop these feelings.
No amount of alcohol helps.
I didn’t think it could be possible to feel so drawn to a woman, but it looks like I have been dead wrong.

They shouldn’t and yet…
They can’t resist each other.

For readers over 18.
Standalone novel.

Get We Shouldn't And Yet… by Stephanie Witter at Amazon