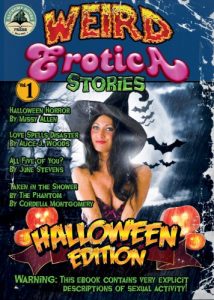 Add to that the Weird Erotica Stories series and you’ve got a wickedly sexy combination of paranormal and erotica. What more could you want? Here you’ll find stories with that little extra twist that sends those delicious shivers down your spine; you’ll be both scared and turned on, afraid of all the things that go bump (and hump) in the night.

Open Volume 1, the Halloween Edition, if you dare and discover what adult bedtime stories are all about. And look for more editions in the series, all dripping with hot erotica–and the occasional drop of blood–and all with a sexy paranormal edge.

Halloween Horror By Missy Allen
When Kendra catches her boyfriend, Devin, cheating on her at his fraternity’s Halloween party, she is horrified. But not as horrified as she will be when she runs through the dark forest accompanied only by frat member Eric, wearing only a short dress, and without a flashlight. Separated from her guardian, Kendra is captured by a strange humanoid alien who seems to want nothing more than to force her to orgasm after orgasm. Bound by his tentacles, pleasured time after time, Kendra is left wondering: was her experience a dream or reality? And does she care?

All Five of You? A Paranormal Rough and Reluctant Gang Bang Short
by June Stevens
Kandace is worried about being out late at night in the city streets, and when she’s confronted by five men eager for her attention, her worries are justified. Why then, is she more worried about her sister? Why, even as she’s forced to take all of the men on at once, with forced deep throat, forced semen swallowing, double teaming, and a very rough first anal experience, is her sister the thing she worries about? The poor men will discover all of the answers after the rough and reluctant gang bang is over, and the prospects for survival are very, very poor.