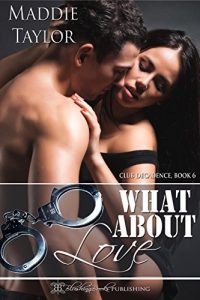 On the outside looking in for years, Angela Hixson thinks she knows what the adult club scene and lifestyle are all about from watching her friends with their dominant husbands and attending “Little Black Dress” Nights in the lounge at Club Decadence. But when her boss tags her to go undercover as bait for a serial killer at a local club in LA, she learns she has no idea what being submissive really means.

Partnered with Antonio “Lil T” Minelli, sexy as hell ex-Green Beret turned security and covert ops specialist for Rossi Security, and the last available Decadence Master, Angie must guard her heart or risk losing it to the one man who has the power to make her kneel in surrender. He is also a man who has made no secret that marriage, family and love aren’t for him. Instead, having sworn off relationships beyond the walls of his club, he meets his needs with an available, willing lady, making it clear up front not to expect more than an unforgettable night.

Thrown together again and again, at work, at play, and in near constant emotionally charged situations, Angie and Lil T fight their attraction, but succumb to their undeniable desire. The chemistry between them is explosive! As Angie falls under the spell of his expertly wielded hand, her fears come to fruition when she realizes she’s lost her heart and given her love to a man who swears he doesn’t have it in him to give in return. In time, she sees past the fun loving, player exterior to the tortured man beneath. Can she convince him to take a chance, to entrust his damaged heart into her loving hands and try again? Or will he reinforce the shields he’s built over the past decade and push her away, losing her forever?

What About Love is the final installment in the Club Decadence series. Catch up with old friends in this fast paced, action packed story, full of as much adventure and romance as the others in Maddie Taylor’s popular series.