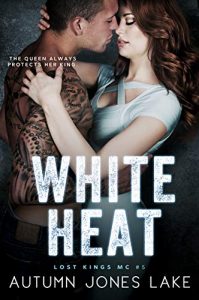 THE QUEEN ALWAYS PROTECTS HER KING.
For straight-laced attorney, Hope Kendall, loving an outlaw has never been easy. New challenges test her loyalty as she discovers how far she’s willing to go to protect her man.
IF YOU HAVE HOPE, YOU HAVE EVERYTHING.
MC President, Rochlan “Rock” North finally has everything he’s ever wanted. Hope as his ol’ lady and his MC earning money while staying out of trouble. The only thing left is to make Hope his wife. But as their wedding day nears, an old adversary threatens Rock’s freedom, the wedding, and throws the Lost Kings MC into chaos.
LOVE MAKES THE RIDE WORTHWHILE.
While the club waits for Rock’s fate to be decided, Wrath has to balance solidifying his new relationship with Trinity and fulfilling his president’s orders.
LOYALTY GIVES AN OUTLAW STRENGTH.
Threats from unexpected places will challenge every member, but in the Lost Kings MC, brotherhood isn’t about the blood you share. It’s about those who are willing to bleed for you.

White Heat is the 5th full-length novel in the Lost Kings MC series and is not intended to be read as a standalone.