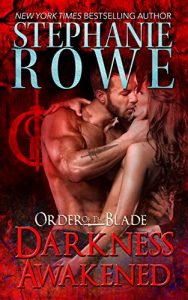 Praised by JR Ward as a “paranormal star!,” New York Times bestselling author Stephanie Rowe rivets readers with her thrilling entry into the dangerous, sensual world of the Calydon warrior, where lust rules, honor thrives, and death looms over all. No warrior is safe from his own darkness, or from the woman destined to love and destroy him.

When his blood brother goes missing, immortal warrior Quinn Masters will break every rule of his kind to save him, including teaming up with the sensuous, courageous woman destined to be his ultimate destruction.

Haunted by a brutal past, Illusionist Grace Matthews will risk everything to rescue her kidnapped sister, even if it means putting her life in the sinfully capable hands of an immortal warrior whose ravaging kisses and intense passion propel her ruthlessly toward a fateful destiny she can’t afford to believe in.

The Legend of the Calydons: The Calydons are a race of ancient immortals cursed with a dark side. Each Calydon is destined to meet his soul mate, to be so drawn to her that he is unable to resist bonding with her through the rituals of his race, but their destiny is to destroy each other and all they care about the moment their bond is complete.