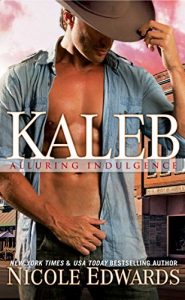 Zoey Stranford might’ve had a crush on the sexy boy next door since middle school, but she’s a woman now, and that crush has turned into a full-blown case of lust. So why is it that at twenty-nine, her libido decides to ramp into high gear and the only thing she can focus on is the intensely sexy, scorching hot boy next door who is definitely not a boy anymore?

The only problem is that Zoey and Kaleb have been best friends for as long as she can remember. Not to mention, Kaleb and his brothers are working on buying Stranford land to build a new resort, and she’s more than a little hesitant about his intentions.

Kaleb Walker has had his eye on Zoey for close to twenty years, but never before has he considered taking their friendship to the next level, no matter how many fantasies he’s had about her over the years. That doesn’t explain why Kaleb is hell bent on having her—in as many ways as possible.

Kaleb finds himself in a precarious situation. His brothers have nominated him to pursue Zoey’s father about purchasing the land needed to get their new resort off the ground. Finding out that Carl Stranford is on the brink of foreclosure and Zoey might just lose her house and the land, Kaleb now has to convince her to put aside her pride and let him help her.

It doesn’t take long before the flames start burning bright and hot, and the two of them burn up the nights and the days as they explore each other’s forbidden fantasies. But can their friendship survive a business transaction or the new friends with benefits clause? Or will they realize that they’ve been overlooking something much deeper that’s been right in front of them all along?